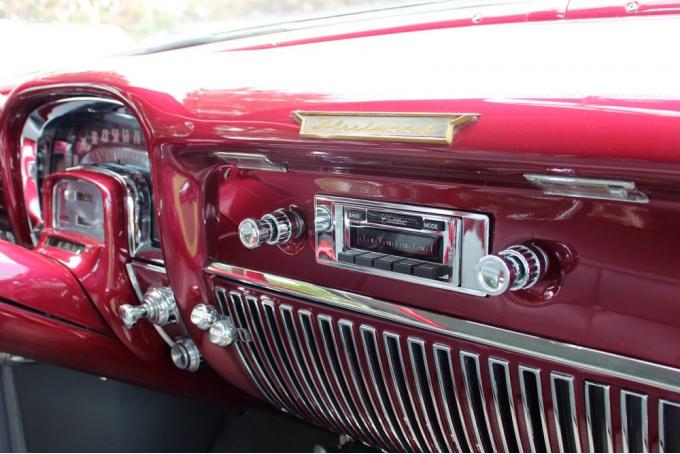 Custom Autosound's main offering, the USA series radios are designed and engineered specifically for classics and street rods.  Our radios come ready to install with no assembly required.  All radios are modified, "kitted" and tested in the USA.

All USA series radios feature electronic volume and tuning control which greatly increase the realiability and function of the units.  For icing Custom Autosound upped the power on all of their units (up to 300 watts) to give the customers the power they want.  Since iPods, MP3 Players and satellite radio have taken off in the last few years, Custom Autosound now offers auxilliary inputs on their radios.  The USA-630, USA-740 and Secret Audio models even have a built in USB port for flash drive playback and an iPod doc controller.  Units are also equipped with an alphanumeric display for song titles and artist name on music files and iPod.

The Custom Autosound Slidebar radios are specially designed to look like an original radio but with a flip of the sidebar, the analog display drops away to reveal a full featured digital display with 7 LCD color choices.

The SST-V hideaway radio is designed to provide a classic car or truck with exceptional audio quality while leaving the dash and original radio visible in the dash. The SST-V receiver / amplifier unit is usually hidden underneath the driver's seat or behind the dashboard and integrates with the vehicle's speaker system.

Custom AutoSound® Radios:
Reason for Inquiry:
* Your Name:
* Email (This will not be displayed)
Question:
Ask Question
Classic Autosound 2022